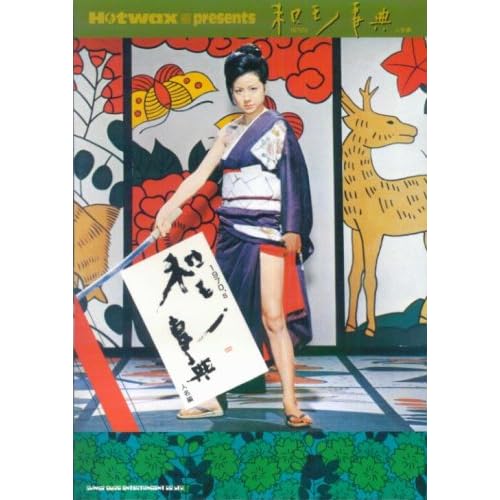 My friend Marc Walkow and I are obsessed with the stupendous HOTWAX series of Books, CDs, and DVDs. A labor of love done by the hard workers over at Ultra-Vibe, inc. these HOTWAX releases are a celebration of what might be the coolest era of film and music anywhere in the world: Japan in the 1960s and 70s.

I've already planned on writing about a ton of the HOTWAX releases that I've picked up over the last few years, in some upcoming posts, but I thought I'd write a little bit about one of their more recent releases from back in November of 2006: A GUIDE TO 1970's JAPAN: A WHO'S WHO.

Running the equivalent of A-Z (or あーん) it is a glossy, full sized book (marketed as a magazine in Japan to avoid photo licensing fees, as I understand it) that covers filmmakers, actors and actresses, and musicians/bands. If your knowledge of Japanese 1970s filmmakers ends at Fukasaku Kinji and Chiba Shin-ichi (aka. Sonny Chiba), then you've got a lot more to learn from this book.

Starting with the wonderful world of movies, the first part of the book has 28, two-page spreads dedicated to the big guns of the 1970s. These include such divergent names as: Akiyoshi Kumiko, Sugawara Bunta, Terayama Shuji (I'll have some posts on him in the future too!), Harada Yoshio, Kaji Meiko, to Watari Testsuya, to name a few. Is Fukasaku Kinji in there? You betcha (and Sonny, too). He'll be in that big gun section. But lesser known actors or actresses like half-Japanese beauty Sally May or Masutomi Nobutaka will even show up in the book. As to be expected, it's the small digest bios about these (now) relatively unknown-- and for all intents, forgotten--that make this book especially valuable for the fan of 60s and 70s Japanese film.

As for the music portion of the book, this is an area that I am (admittedly) less familiar with. You've got famous singer/actor Sawada Kenji in there along with girl pop bands like Pink Lady, Downtown Boogie Woogie Band (whadda name!) and one of my personal favorites the psychedelic genius and frequent Terayama Shuji collaborator J. A. SEAZER (aka. 'Julious Arnest Cesar' aka. J.A.シーザー) (More on these guys at a later point too).

The book also comes with a fantastic fold-out poster for Fujita Toshiya's great VIRGIN BLUES (aka. バージン・ブルース, Nikkatsu, 1974). (More on this too, at a later point!)

As a final note, you must be able to read Japanese-- or at the very least, be able to fight through it, in order to read the entries. But even for the die-hard fan of Japanese film who can't read the stuff, it's a good resource for Japanese names in English (they're listed in both Japanese and English) title information.
Posted by Nicholas Rucka at 1:02 PM