Katsuhito Ishii's gigantically weird film ナイスの森 (aka FUNKY FORREST) will be playing this Friday, June 5th, at midnight at the Silent Movie theater. 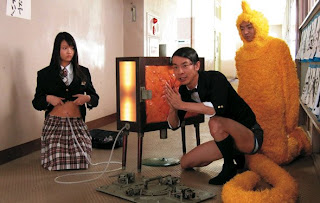 What's to say about the film? Well, it features color coordinated girls DJ-ing gnarled and moss covered trees; prolapsed anuses built into TV-sets; men dressed up as fuzzy animals with, erm... tails coming out of their crotches... Oh and it features Tadanobu Asasno and a fat, chocolate bar eating Caucasian kid as the Guitar Brothers. I dunno... You all should just go and see it. This is one film that is better on the big screen with a crowd (that is potentially high/drunk).

Here's what the Subway Cinema folks wrote about the film when they screened it in NYC back in 2006:

Not since David Lynch slunk onto the scene with ERASERHEAD has a more singular vision broken out of one man's skull and run riot across the silver screen seducing audiences with its sugary strangeness. But FUNKY FOREST: THE FIRST CONTACT is a hermetically sealed, fifth dimensional artifact from Planet Japan beaming out of our eyes and into our universe. The only movie with an A side and a B side this is a full-on invasion of third-dimensional Earthling brains by a twelfth dimensional alien consciousness.

From the director and cast who brought you last year's Audience Award Winner THE TASTE OF TEA, this flick invites you to drink the Kool Aid, take the red pill, show us your dancing and break the chains of reason and logic that bind our brains. Director Katsuhito Ishii (who directed the animation in KILL BILL VOL 1) and a crew of ace comedic actors (including Tadanobu Asano as the laconic Guitar Brother) have made a movie featuring TV's made of giant buttholes, powered by belly button energy and capable of producing miniature sushi chefs. Not everyone can master this frequency. As the Shorty Trio says, "Some days people laugh, some days…they don't." With its shoe obsession, fixation on Snickers bars, and its firm belief that the secrets of the universe can be unlocked by dancing, FUNKY FOREST: THE FIRST CONTACT strips everyday life of meaning, turns mundane tasks into bizarre rituals, and makes surrealist hay out of our most sacred ideals. This is not a movie. This is an invitation to join a dancing army of holy fools and travel through time and space to the super-elastic, thoroughly fantastic Planet of Piko Riko." (Link)


Other stuff I've written about Ishii.
Posted by Nicholas Rucka at 2:22 PM No comments: