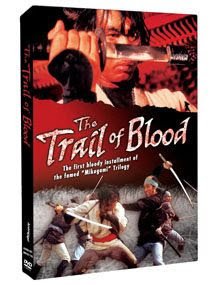 1960s and 70s Chanbara films (sword fighting films) are like pulling on an old pair of jeans: familiar and comfortable (partly because they are familiar). They aren’t meant to do much more than entertain and pass the time; they feel familiar because the stories are recycled (as are the actors and the sets) and the action set pieces are more or less the same.

1960s and 70s Chanbara films are also like hamburgers in the same way that you get a craving for one occasionally and then satisfy it. It’s not supposed to be an everyday meal—at least it shouldn’t be if you want to remain healthy, right? Part of the ‘thing’ about these Chanbara films is that they are sword fight movies made by and for sword fight fans. Basically, if you don’t like burgers, you don’t eat them and if you don’t like sword fights, then stay away from these films. They’re for the hungry fans.

I’ll make this clear: I like the Chabara film genre a lot. I don’t expect anything revolutionary and (overly) surprising from these films when I watch them. I gravitate to them when I am in the mood for a thematic treatment of right triumphing over wrong delivered through a sword. It’s that simple.

Director Ikehiro Kazuo is a veteran of the sword genre and came to Trail of Blood after making a slew Chanbara films during the 60s (including several Zatoichi and Nemuri Kyoshiro installments) with a journeyman’s knowledge of what makes one of these films tick.

For a time, what defined the Chanbara film and (therefore) filled seats was to take the equation of a badass stranger with a sword who rolls into town. Next add some sort of local problem that he gets wrapped up in (usually reluctantly) and then, after getting drawn into it, having him get brutally beaten up by the local bad guys. Finally the hero exacts a glorious (and sometimes bloody) revenge typically in a closing blowout that resets all wrongs to rights and the film ends with the hero wandering off to his destiny. The end.

As is to be expected, the audience occasionally tires of the same old thing, new package gimmick and in order to stymie this, the studios would add a little twist to the recipe to give it a different flavor. Enter the blind (or handicap) swordsmen, the female swordswomen, the anti-hero, the swordsman who uses his, ahem, ‘flesh-sword’ for interrogation purposes and, in the case of Trail of Blood, the swordsman with long nails.

The man with said nails, Jokichi ‘from Mikogami’, is a worn out swordsman who after suffering a particularly savage beating decides that maybe it’s time to go straight. Shacking up with the first prostitute he meets (Okimi, who also wants to go straight) they move far away to find their fortunes and be fruitful—but not before raising the ire of a group of yakuza thugs who a) like sleeping with Okimi and b) don’t like a smart ass swordsman telling ‘em what to do. Even with the odds stacked against them, Okimi and Jokichi manage to move to their own piece of land and carve out a quiet life for a short time before their whereabouts are discovered and their lives are brutally disrupted.

Falling squarely into the middle of a rival gang war, Jokichi is forced out of retirement to revenge the deaths of his wife and son, while also managing to lose two of his fingers. But rather than hindering his swordsmanship, Jokichi sharpens the nails on his remaining three fingers and turns it into a razor-sharp finger pitch-fork-- all the better to slash his enemies eyes!

The first installment of the Mikogami Trilogy (see part two’s The Fearless Avenger review), Trail of Blood runs at a brisk pace, has clear storytelling, solid performances, striking visuals and a fantastic score (one of the funkiest of the 70s sword flicks, to my ears, easily winning a cool ‘10’ on the booty-shaking scale!). The fights are good and the blood sprays ejaculates in copious crimson plumes. Collected this all together, if you’re a fan of the Chanbara genre then you already have a good reason to check out the film; but another reason for watching Trail of Blood is for Japanese film historical reasons: cinematographer Miyagawa Kazuo.

While not a household name in Japan-- or anywhere for that matter-- Miyagawa Kazuo’s work is familiar to even the passing Japanese cinema fan. Clearly a giant in Japanese film his career spanned more than 50 years and included cinematography on a veritable who’s who and what’s what of Japanese film: Kurosawa Akira’s Rashomon and Yojimbo, Mizoguchi Kenji’s Ugetsu Monogatari (Ugetsu) and Sansho Dayu (Sansho The Bailiff), Ichikawa Kon’s Tokyo Olympiad, Masumura Yasuo’s Irezumi (The Tattoo) and even an installment of the sleazy and exploitative Razor films! I mean, who was this guy? And yet here we find him doing solid cinematography on a slice ‘em up Toho program picture like Trail of Blood.

Rather than be a sad thing that such a talented and genius cinematographer would be working on an exploitation film, I think it’s kind of cool that he’s working on a genre film that most of the most prudish filmgoer wouldn’t be found dead at. Reason being, you never know what kind of riches you’ll find when you watch a Chanbara flick; that’s what makes them so much fun to watch. Essentially, Trail of Blood has everything that it needs to satisfy that Chanbara hankering but what really makes it cool is what’s unexpected about it—the ‘bonuses’ if you will: a funktastic score, razor talons, and solid genre cinematography by one of the masters. All I can say is enjoy!
Posted by Nicholas Rucka at 4:19 PM