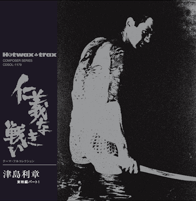 So, if there ever was a doubt about Hotwax being totally awesome-- it's been officially put to rest.

The CDs? Oh, you know, only a little collection of Tsushima Toshiaki's UN-RELEASED sub-themes from the Fukasaku Kinji's JINGI NAKI TATAKAI (aka. Battles Without Honor and Humanity) series! Holy shit! (Guess what I'm buying!) 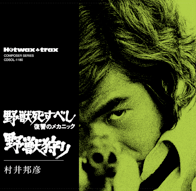 Other discs include: a collection of themes by Kaburagi So for the various NORA NEKKO ROKKU (Stray Cat Rock) films and Murai Kunihiko's themes for YAJU SHISUBESHI: FUKUSHU NO MEKANIKKU and YAJU KARI. (Neither of which I know anything about.)

For further reading on Tanaka Noboru I recommend what Jason Gray has written on his blog, since he's attended several Tanaka related screenings and has heard Tanaka speak about his filmmaking in person. Link.
Posted by Nicholas Rucka at 4:11 PM

i've the jingi CD on it's way already, just one of the hotwax discs on my list that i could get with decent postal rates from cdjapan. the book is mine in october, via yesasia.

Very cool. It's too bad Tanaka passed away -- he seemed in good spirits when he attended last year's screenings, but had become somewhat frail since the ArtsMagic interview a couple of years prior. He had a great, great eye.

Logboy's already on it! I'm going to try and wait until I'm next in Japan to buy these goodies.

Also as soon as I'm back in LA and have some time, I'll do a proper round up of the Jingi Naki... themes CD that came out several years ago along with a review of the Toei New Action collection. (These are things that I've long planned to post about, but life has been getting in the way!)

Jason, I'm jealous that you've gotten to see these films in person and hear Tanaka talk about them. If I could take the geek way back machine to 1960s and 70s Japan just to watch films, that'd be fine with me!

if you buy into their 'free shipping' lower limit, yesasia's about the best place to pick em up. japan, they're 2.5k each, about £10 or just over...


unfortunately, most places are patchy on which they stock or they're plain asking far too much for them when they're already imported into the USA or UK, wherever - HMV.co.jp has the best choice with the lowest shipping, but it's still another £6 or £7 per CD to the UK. Amazon.co.jp have removed cheap shipping options, making a CD 3k yen to post!

I need someone in Japan who can cope with my shopping demads... heeeelllllppppp!

I didn't realize that HMV was the cheap way to go. The stores suck in Japan, so I assumed that their online presence was the same. Guess I'm wrong!

But yeah, it's a pain. Maybe you can do what some of my pals do, which is plan an annual trip out to Japan and do a huge shopping spree at that time?

(The plus with this, of course, is being in Japan!)

i can't go to japan, no. i think don brown's giving me the silent treatment after me having asked him to try and help me out again recently, with a couple of books from amazon.co.jp since they've no cheap shipping.

HMV is relatively cheap for japan-based stores online - those that do english are few and far between - but for the absolute best, buy a couple or more and qualify for free postage at yesasia and they're as cheap as they possibly could be; hence the links above!

do you still get comments, i wonder? i have a bunch of hot wax books i want to unload/sell, like 6 or 7, and there's not a lot of info about them online. do you know how much they are worth and where would be the best place to sell em besides ebay?

Hi there. Sure, I'll dust off the old comment section to answer this: I have no idea, honestly.

I still have all of my books and just did a cursory check of both eBay and Amazon Japan. As I'm sure you saw, I can tell you that people are asking for serious $$ on eBay for these old books. Of course, whether they're actually selling them is another story.

Looking to Amazon Japan, it seems like the books are holding their value on the used market. Again, I have no idea how many are actually being bought. But that's info for you.

My suggestion, unless you really need to get rid of them, hold onto them. Especially in light of the BD releases Arrow in the UK/US has been doing of some of these old movies. However, if you want to get rid of them, sell them as a single 'lot' on ebay. Set a fair price and wait and see what happens?