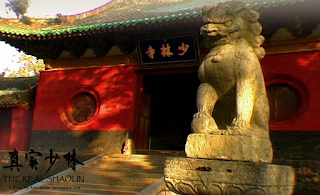 One of the projects, which I worked on and that I've had to keep mum about for the past year and half, is called THE REAL SHAOLIN. It's a documentary that I co-wrote with the director Alexander Sebastien Lee about Shaolin Kung Fu and the allure/mystic that surrounds it. It's a real labor of love by Lee who spent a lot of time, energy and money over the past four (actually almost 5) years making it. We had a great time working together on it and more importantly a good friendship was forged out of it.

So why do I mention it now? That's because THE REAL SHAOLIN's world premier will be at the upcoming Toronto International Film Festival!

Toronto - The Toronto International Film Festival announces 26 documentaries to screen in various programmes as part of TIFF08. One documentary will screen in Mavericks, two will screen as Special Presentations, one as a Masters title, and 22 as part of Real to Reel, showcasing the finest in non-fiction cinema from around the world. Highlights include a look at a fashion master in Valentino: The Last Emperor and a self-portrait of French auteur Agnès Varda in Les Plages d'Agnès. Guitar heroes Jimmy Page, The Edge and Jack White are profiled in It Might Get Loud. Two films, Youssou Ndour: I Bring What I Love and Soul Power, explore the musical exchange between Africa and abroad. Three films examine crusading eco-warriors - controversial Canadian activist Paul Watson in At the Edge of the World, authors Eric Schlosser and Michael Pollan in Food, Inc. and Native Americans of the Hoopa tribe in Upstream Battle. Two films revisit cases of injustice - from the courtrooms of California in Witch Hunt to a tarnished legacy in Israel in Killing Kasztner. Several films intersect with various sports, including kung fu masters in The Real Shaolin and LeBron James's high school basketball team in More Than a Game. Two films have the backdrop of Ivy League schools in the tumultuous year of 1968, with Tommy Lee Jones playing college football in Harvard Beats Yale 29-29 and student strikers at Columbia University in A Time to Stir. Not to mention the sexual revolution uncovered in American Swing.

"Documentary-making continues to flourish," says Thom Powers, Documentary and Mavericks Programmer. "Every year there are more films that command the big screen. There has been a short-sighted focus on the recent lack of a documentary blockbuster. In the larger picture, more docs are getting funded and released theatrically than ever before."

Now live at tiff08.ca/blogs, the Festival's Doc Blog returns to offer visitors all of the exciting details and comprehensive information surrounding this year's inspired non-fiction films, and will feature contributions from programmers and filmmakers alike. Ticket packages now on sale. Purchase online at tiff08.ca, by phone at 416-968-FILM or 1-877-968-FILM or in person at the Festival Box Office at Manulife Centre, 55 Bloor Street West (main floor, north entrance). Box Office hours are 10 a.m. to 6 p.m., Monday through Saturday. The 33rd Toronto International Film Festival runs September 4 through 13, 2008.

And here's a link to THE REAL SHAOLIN's webpage. It's kind of slow loading and a bit out of date, but I think that'll be rectified soon. There's more to tell, but I'll save it all for a later date!

I'm very happy about this!!
Posted by Nicholas Rucka at 7:26 PM

Oh, wow! Congratulations, man? You going to be in Toronto for the festival?