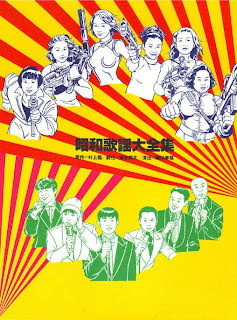 Has it been that long, really? I'm certainly balder and paunchier, so it must be true... But at long, long last Shinohara Tetsuo's film adaptation of Murakami Ryu's KARAOKE TERROR - THE COMPLETE JAPANESE SHOUWA SONGBOOK (aka. Shouwa Kayou Daizenshu 昭和歌謡大全集) is coming to DVD from Synapse Films on April 29th, 2008. (link)

And why should I report news that you can find a billion other places on-line? Well, that's because I wrote the liner notes for this DVD release!! My very first time doing so, I might add, and while it's been so long that I have no idea what the hell I even wrote about-- trust me, they'll be the best liner notes written by a first timer to be published two years after the fact.

Oh, and for the record, I like the movie. Read my review here.

Update: Apparently the Youtube clip has been taken down. However, Todd over at Twitchfilm.net tells me he has trailers embedded in the Twitch player. Link.
Posted by Nicholas Rucka at 12:41 PM

Wow. this completely flew over my head. I have never heard of this until now.
I know what will be on my import list come april.....unless there are any signs of a UK release date?

Don't know of any. But with the disc ready to go, perhaps a UK distributor will be willing to port it over?

I'm OK either way. as long as there will be an English friendly disc.

you'll be 99% certain to not see such stuff in the UK. america has trouble supporting it, financially, with a much longer and tightly-knit relationship with asian pop culture, and a population of 200m to be sold too...

the UK has a smallish market for such things, but most of those folk know that a) it's out sooner elsewhere b) it's a wider choice to be had elsewhere c) it's certainly going to be half the price elsewhere... oh, and d) the BBFC system and the small-mindedness of the market here doesn't allow for the kinds of cultural difference that an Unrated system can support.

so, i buy mostly american discs and live in england.

I suppose if you've got an all region player and considering the state of the US Peso (formerly known as the dollar, greenback or 'buck') then you can clean up foreign discs with your mighty Pound sterling. The only hitch would be shipping charges, but that'd always been an issue, I suppose....

even considering postal charges, any foreign market releasing japanese films (other than japan) can beat the UK...

typical UK prices have lowered. you could have expect £20 a time more than 6 years back, £15 is a fairly typical online price that's been around for as many years, the more commonplace online prices have lowered as DVD has grown to between £11 - £13, with the lowest price for major mainstream releases gettting only as low as £8 (casino royale for example; if you looked around) but never better than that and certainly not for non-mainstream stuff can you better the £15 online deal the very large majority of the time.

in contrast, off the top of my head, typical prices from major players in asian / unusual stuff stateside usually hits between £6 - almost £9, averages about £7. now, since we don't pay VAT on imports until we hit £18, if you plan ahead you can fit two in one parcel and pay about £4 postage on the lot, netting two films for under £18 excluding postage; HK, Korean and Japanese discs (even older USA ones), if you apply using yesasia, can take benefit of the 'no VAT guarantee and free postage' scheme they always apply . i would say the average cost of a DVD when importing actually comes out at around £10 all in, with so few actually coming from japan or korea and enough from HK to balance out that difference, the asking price of UK discs is absurd. still, the phrase 'rip-off britain' was coined some years back, and it's still hard to logically explain why it happens here more than elsewhere, but it certainly does get explained away.

oh, and anyone in the UK who has a non-multiregion player, well... they'd have to be either not applying one ounce of thought to what they're buying, or being deliberately bloody-minded about sticking to domestic releases. there's still a perception here that when foreign production lines go into action on stuff bound for the UK that the overall quality suddenly rises - and that there's no resale value to owning foreign goods of any sort, which i suppose stems from britain culture of being interested in the act of the purchase more than what's being purchased. it's also damn hard not to buy a multiregion player from a major manufacturer - not that they make them that way, but that retailers know from the outset that prices are so high here on things like CDs and DVDs that folk instandly start looking abroad, for all those other reasons other than price i mention above also...

Does anybody know something about the soundtrack or the music which is used in the trailer?

I can't find any information regarding the songs.
Hopefully Synapse will have fully subtitled credits on the dvd.

Thanks for the link, Todd.

The guys at Synapse have done a good job on the booklet (large amount of the credit must go to Marc Walkow at Outcast Cinema, though) and I can tell you that there are full song credits in the booklet with Romanized readings et al.

So yes! You will be able to track down those classic Showa era Enka tracks that you love so much and bittorrent them to your heart's desire. Just please buy the DVD first... (º_º )~!

That's great news. Big thanks to everybody who made that happen.