What good is blood if you can't sing about it? 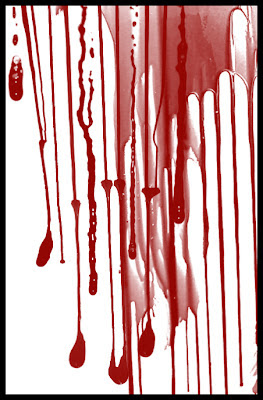 Last Friday my wife and I saw Tim Burton's SWEENEY TODD. Or should that be, Tim Burton meets Stephen Sondheim's SWEENEY TODD? Anyway, you all know this film-- I mean how can you not? It stars that pirate dude and that chick who would hang out at support groups and afterwards hit the laundromat to steal and pawn clothes. You know the one I mean right? But-- <*pssst*> -- listen up buddy, I've got news for you, the real star is the book, you know, as in Stephen Sondheim's book for the original 1979 musical. The lyrics. What they sing, right? You get it. 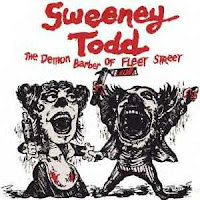 And you know what else? I liked it. Kind of surprised about that since I haven't much cared for recent Tim Burton films. I think the last one I liked was 1996's MARS ATTACKS! The others.... meh... I don't want to complain here. But suffice to say, they didn't work for me.

Coming out of the theater I was thinking that the film finally bridges two worlds that, on the surface don't appear to have much in common, but somehow actually are soul brothers: the musical and the gore movie.

It took me a couple of days to remember where I'd first read about this idea but finally it just came to me: Travis Crawford's portion of the DVD liner notes for Anchor Bay's edition of Lucio Fulci's THE BEYOND (metal tin addition, 2000) he attacks the critics head-on with the following critique:

"...One of the reasons why most mainstream film critics are so occupationally inept is that, still rooted in an archaic literary and theatrical school of criticism that is woefully inadequate for judging a predominantly visual medium, they are often unable to relate to cinema on the purely sensory level on which it should so often be appreciated. And while time has granted genre exceptions-- critics don't typically gripe that the plot screeches to a halt to allow for Fred Astaire dance numbers or Marx Brothers comedy routines-- the inherent disreputability of the horror genre ensures that it will probably be a long time before a New York Times critic pauses from his adherence to the laws of narrative-and-characterization dominance, to admire a well-executed gore sequence..."

When I first read that, I was like, "Woah! Travis is totally right!" It seems so obvious to me in retrospect that, yeah, a spontaneous burst (heh.) of song and dance or, in the case of a Lucio Fulci film, the sudden vomiting of a character's entire viscera are basically spiritual cousins: the visual non-sequitur.

So going back to TODD-- SWEENEY that is-- here you've got a moody dark tart of a film that makes no attempt to hide its misanthropy, opening with a song about how shit London is and then for the next hour or so we watch as Todd awakens to his calling as a merchant of death and then finally starts slicing away. Thankfully, Burton doesn't hide this from us and, arguably, preps us for the eventual deluge with an opening credits sequence that winds through a factory of blood that looks lifted from those grinding gear Lionsgate bumpers with candy cane red blood oozing and dripping about like red mercury through it's grease caked gears.

Amid song, Todd's barber's razor cuts a bloody swath through many necks, young and old - a red arc of blood spraying and occasionally hitting the camera lens (some academic will inevitably claim that this implicates the audience with the act, making us aware of the proscenium), with its excited pumping. And yet, somewhere in all of this, the film is about how a man becomes dehumanized by the twisted machinations of another man, and once recognizing it, he embraces this separation and uses it to fuel his cool detachment as he becomes a vector for his physicalized revenge.

In the end, the film does manage to sneak in a moral to the story, but this comes as no surprise considering that horror has always been a highly didactic genre that panders to the basic rules of right and wrong. But the funny thing is, it comes at the end of gleeful bloodshed and singing.

SWEENEY TODD wallows in its baseness-- its Grand Guignol bloody exploitation-- singing and slashing its way with abandon. One reason why it seems to work so well is because song and violence seem to naturally work well together. It's just interesting that it took so long for it to come together on the big screen.

My pal Grady Hendrix has a good review of the film on the NY SUN'S website. He points out, appropriately, the absurdity of releasing the film as a holiday movie.
Posted by Nicholas Rucka at 12:41 PM