Two nights ago I finally had a chance to see one of my favorite [Japanese] bands, BORIS play here in LA. They're relatively popular in the US (in the alternative doom, metal, noise, shoegazing) music scene and so they usually tour once a year.

The thing is, I've never failed to miss any of their live shows -- not just here, but also in Japan. So I was super excited to actually have a chance to check it out.

A friend of mine at work was able to get me on the Southern Lord guest list (thanks guys!)and so all that was left for me to do was show up, buy some merch and have a few drinks while enjoying the show. Mission accomplished!

I got totally lost trying to find the venue in Echo Park (the Echoplex is a damn hard place to find, if you don't know what you're looking for. Signs would help!) and so I missed the very first opening band. Don't know who it was. But I did catch the incredibly odd programming choice of Damon and Naomi, a kind of acoustic depresso cross of mid-era Swans meets Angelo Badalamenti. Oof. Not for those on prescription mood enhancers. But to be fair, I did like their music at points, though I found the set to be overlong. It might just be a little bit of this stuff goes a long way! Anyway, they were as Demon joked with the audience, the 'quiet doom' to Boris' full-on jet engine of Heavy Rock. 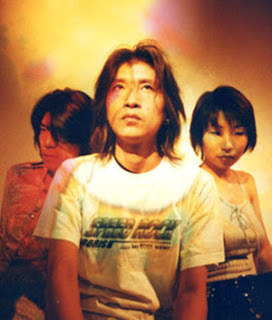 So then Boris took the stage and amid curls and puffs of smoke from a smoke machine hidden behind their formidable speaker stacks. The lovely Wata -- looking like she stepped fresh out of a cafe in Omotesando -- poised calmly with her guitar; Atsuo wearing his headgear microphone sat behind his drum kit replete with a large Sabian Gong; and Takeshi stood front and center with his double-neck Ibanez bass/guitar, howled and took front charge on the night.

Joining both Damon and Naomi and Boris was Michio Kurihara, a polyester shirt wearing guitar maestro who looks like he stepped out of a 70s Shin-Toei Yakuza film. His addition to both performances (Damon and Naomi and Boris) were trippy porno soundtrack gone noise sounding squeals that belched and blurped their accents throughout the songs. At points during the Boris set, he would rip out a particularly intense guitar solo that both excited and punished the audience with its intricacies of play and perversion of the funk genre. Since I am totally unfamiliar with Kurihara's solo work, I can only comment on what I saw and have heard on the Boris with Michio Kurihara Rainbow disc (I own the Japanese version which has a different track list that the US version, for what it's worth) but Michio appears to add an extra layer of psychedelia to the roarin' mix that pulls Boris into a more stoner territory. I personally love the sound, but then again, I'm a huge fan of all things Boris!

Suffice to say, while there were some weenies who seemed to be less than impressed by the show-- hey what do you expect in too cool for school LA?-- I had an awesome time. Definitely try to catch them when they're in your neck of the woods.**

Here's a taste of Boris doing their song Ibitsu:

** I see that Boris will be playing at my alma-mater Bard College, on October 27th. Say what you want about the school but Bard always did have good bands play there.
Posted by Nicholas Rucka at 12:45 PM

Damn. I bought a ticket for the show, but then PJ Harvey decided to have Her show on the same night and I MISS BORIS AGAIN.

Next time. Thanks for the review! Love your blog.

How was PJ Harvey? I've always wanted to check her live shows out, but have yet to. I understand that she's a great performer (must be if she's been doing it for so many years, right?).

Anyway, Boris plays stateside enough that you'll probably be able to see them. But definitely try and check them out when you have a chance.

And thanks for checking out the blog!