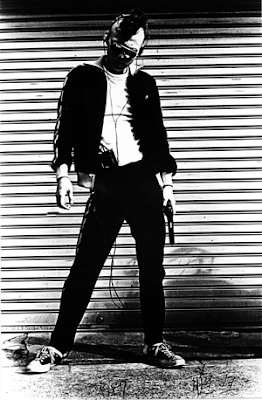 Yesterday, at long last, I finally had a chance to watch Ishii Sogo's CRAZY THUNDER ROAD. I will write about it at another time (as part of my new series of capsule reviews that I'm working on) but in short, it's pretty awesome.

While doing some poking around on-line for more Ishii Sogo stuff, I stumbled upon numerous clips from Ishii's seminal 1981 short film SHUFFLE. Unfortunately, these clips only add up to about half of the film (taken from different parts) and while I'm not advocating bootlegging here, there's just no other way at the moment see a lot of Ishii's work.

Ishii Sogo is a badass. It's just that simple. Bursting onto the filmmaking scene in the late 1970s with a vicious DIY work ethic and a punk rock sensibility, what I love about his early films is how they hum with immediacy and burst angry statements about how shit society is.

In my opinion Ishii Sogo's movies are like bottle rockets shot at your eyes: they DEMAND your attention and you WANT to watch no matter how much it stings.

Watching these clips from SHUFFLE I was struck by how much the opening scene seemed to inform Tsukamoto Shinya's opening for TETSUO (I wonder if it's conscious or not?). Every shot in this opening is beautifully composed and has a considered purpose: it's economical and powerful and will eventually act as a counterpoint to chaotic color, hand-held shots that come later.

The rest of the clips, including the mind-blowing ending, ripples with Ishii's regular themes and metaphors: a youth who is bucking against the norm; radical body manipulation, running, fire arms and loud, punk/industrial music.

Question: What does it take for a company to release a box set of Ishii's stuff in the US? Come on, it's been done for you in Japan. Just port it over and slap on some titles. If you do this, you'd already have one sale: ME.

Posted by Nicholas Rucka at 5:18 PM

there are subs kicking aroung on t'internet for those that bought the first sogo ishii box. i'd love to see 'crazy thunder road' make it america.

I'd found the links to the subs on-line but since I don't own the boxset (since it's so damn expesive) I've had to wait until I was given copies to watch.

But I agree, CTR needs a release in the US. In fact, more of his old stuff should get a release in general, but the situation as I understand it has to do with Ishii and not some obstinate production company. Hopefully he'll allow someone here (like Synapse?) to give his films the good treatment.

Yes, that would be nice.

there's a second set due in japan too.