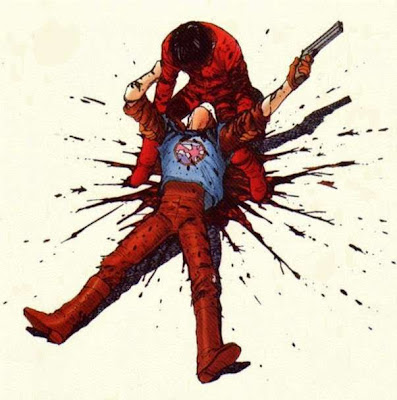 On-line postings about the long rumored AKIRA live action US remake (perhaps) finally getting some traction has pissed off a load of fans in Japan-- inflaming comment boards on Mixi and the infamous Nichanneru.

But why now? The AKIRA remake has been one of those long planned projects that has (rightly) been in limbo for four years.

Well, as shown below, Warner Bros. has been trying to fast track it before tomorrow's long dreaded and looming writer's strike and apparently someone picked up on the following blurb from bloody-disgusting.com and translated it into Japanese. Now fans in Nippon are bristling with self-righteous indignity and calling for blood.

One of the greatest post-apocalyptic thrillers ever told was the animated Manga Akira, which saw an announcement wayyyy back in July of 2003 that James Robinson would pen the adaptation with director Steven Norrington. I'm sure this has long passed, but we do have something official that just leaked to us through the grapevine, something that's going to blow your socks off. We've been informed that Warner Bros. Pictures is trying to get Akira off the ground pre-strike and have attached 29-year-old Oscar nominated Irish director Ruairi Robinson! No more details have been revealed other than he directed a mind blowing short film entitled The Silent City, which can be viewed over at BDTV. Watch this spot for more news soon and cross your fingers that this sucker gets rolling ASAP. (LINK)

Hey, you know what? The Japanese fans are absolutely right to be pissed off about this. But before they grab their pitchforks and torches let's remind them that there's another Kurosawa Akira remake about to happen in Japan and if they act fast they can stop it. (Link to this via Twitchfilm.net)
Posted by Nicholas Rucka at 10:46 PM

2003 is now considered a long time ago for a project to be rumoured about? I feel old.

There were absolutely rumors of a live action AKIRA even as far back as 1989. Although, retrospectively, it seems more that this was confusion from US fans perhaps about Tsukamoto's Tetsuo. I'm sure I can dig up the old Animag issue with the rumour mention if needs be (but it's probably not worth it).

I agree though - remaking Kurosawa seems sillier than doing a live action remake. At least there wasn't a live action AKIRA before.

hey, I like your blog. I've linked to it on mine.

Thanks for stopping by, being a fan and linking to your blog. I look forward to checking your blog out!