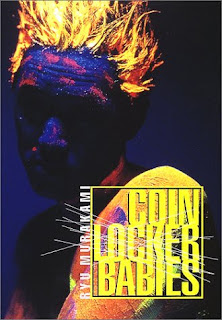 A quick follow up on the Asano Tadanobu post from yesterday here. The long rumored "Coin Locker Babies" film adaptation of the eponymous Murakami Ryu book is now categorized as "in production" on regular IMDB and "unknown" on IMDB-Pro.

Though mentioned at Twitchfilm way back in March 2005, there was no discussion about how this was a pet project of Sean Lennon (?!) who had optioned the book way back when and has cast himself in one of the parts (presumably, one of the twins). The fact that the story revolves around a pop star and his twin and how they're trying to track down and murder the mother who abandoned them in a coin locker as, you guessed it, babies, is very interesting. Perhaps Yoko needs to hire more protection?

Asano is supposedly still attached, but we'll see. Though there is now a larger crew list complete with cinematographer Steve Gainer's credit and Miramax as distributer, I can't verify the film's status on line.

The key question I have is will the film be in English or Japanese? What will Asano speak?

Anyway, file this under wait and see. Here's a blurb from LastFM.com about some Coin Locker Babies teaser that was on the 2006 Sean Lennon "Friendly Fire":

After Grand Royal Records' demise in 2001, Sean signed with Capitol Records, yet no solo material surfaced until early February 2006, when "Dead Meat" was released as the first single from his new album, Friendly Fire. A promotional trailer for the CD/DVD package of Friendly Fire was leaked online in early 2006. The trailer featured scenes from the film version of the album, a DVD of music videos comprised into a film. In actuality, the videos were screen tests for Coin Locker Babies, another project on which Lennon is working, and rather than waste film, he decided to create a cinematic counterpart to his new album. Friendly Fire went on to be released in October, 2006. (link.)

(Sean Lennon - Headlights Music Video: Will Coin Locker Babies look like this?)
Posted by Nicholas Rucka at 10:14 AM