Been meaning to post about this for a while and am now just getting around to it. My old friend Kumakiri Kazuyoshi, for whom I did the subtitles for his debut feature KICHIKU DAI ENKAI (for its initial film festival run), has a new film in competition at the upcoming TOKYO FILMeX called NON-KO 36 SAI: KAJI TETSUDAI. (The English title is just: NON-KO)

Although I have yet to see it, it appears that this film is a kind of return to Kumakiri's roots. It's a simple character drama with the cast and crew positions filled out by Kuma's old team. Sakai Maki stars as Bando Nobuko and Ujita Takashi again picks up the scriptwriting reigns with Kumakiri. Kumakiri's old Osaka Geidai pal Akira aka. AKAINU has composed the music and Kimura Toshiki is on for producing duties.

The story is as follows:

Nobuko tried to be successful as an actress in Tokyo (stage name ‘Nonko’), but wasn’t popular. She married her manager and soon divorced. Now a once-divorced woman in her mid-30s, she returns home to the Shinto shrine that her family runs, to help out with domestic chores. Her father is always in a stubborn rage, her mother is always trying to calm things down. However, Nonko’s married sister, who already has a daughter, scathingly says of Nonko, “It’s all over for her.”
There’s no place to run to and no place to belong, just a backwards little country town. The only thing to do is ride her bicycle to her friend’s bar to drink with the owner, another divorcee. She can’t remember the last time she got dressed up or had sex.

Nonko, who is totally lacking in ambition, encounters a young man named Masaru. He has great expectations about selling chicks at the shrine festival. Nonko ends up taking him to the house of Yasukawa, who allots space for festival stalls. Masaru is rather naïve and pitiable, but this earnest and straightforward younger man puts a smile back on her face, and she gradually becomes more emotionally and physically receptive, until her ex-husband, Udagawa, makes his appearance.
Nonko’s heart begins to tremble. 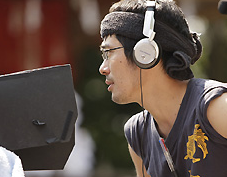 I'm excited to see this as I think that Kumakiri is an immensely talented filmmaker who succumbed to early career success (to some extent). Of just about all of the young directors I encountered, Kumakiri has shown without a doubt some of the best intuitive filmmaking skills. And plus, any director who casts Wakamatsu Koji as Babe Ruth is doing something right.

NON-KO will be playing FILMeX Nov. 24th at 6:30pm and there are English subs, I think.

Here's a clip from the local Yorii news, where NON-KO was shot, talking about the filming of the movie and its recent premier. Kumakiri is, naturally, heavily featured.

And here's the link to the trailer.

There's plenty of more info about the film on the very English friendly website. Something tells me that they're actively courting the international audience...
Posted by Nicholas Rucka at 8:11 PM

Nice post. Non-ko is one of the hottest tickets at FILMeX (press and ID holders had to pre-request for this and Sparrow). Looking forward to seeing it.

Are you going to be able to make it over?