Shogun Assassin! Hannukah, Christmas, or Kwanza - Here's a gift for ya 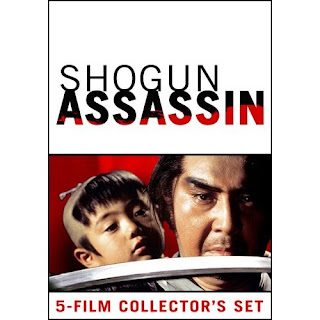 Just got my review copy of this 5-film box set in the mail. It comes in a slip case with fold out packaging ala Homevision's legendary BATTLES WITHOUT HONOR AND HUMANITY box set. The set also includes two essays by Monsieur Patrick Macias: "Samurai and Son - The Making of Shogun Assassin" (this is adapted from the original interview published in Macias' "Tokyo Scope" book, I think) and "The Greatest Team in the History of Mass Slaughter - Three Decades of Shogun Assassin."

But you know what's also cool about this? The fact that Animeigo actually put together full liner notes for this set. You remember those? Back in the day Animeigo's LaserDisc liner notes were the best. They served as a primer, a glossary and a history lesson all in one. I've asked them numerous times why this essential tool was no longer being produced. Answer: money. But I've always felt that people would be willing to pay a little more to get something better in the end. It appears that this box set has made it financial worthwhile for them.

The films look good. They sound good. But are these really the original Lone Wolf and Cubs? Short answer: yes and no. (It is Shogun Assassin, I know) The first two are the famous re-edits of LW&C. Three through five are English language dubs of the films that Animeigo did on their own. In fact the box set includes an on-camera interview with the English dub director Scott Houle. So question is: why don't they include the original Japanese audio tracks with English sub options? They clearly have the subtitles from Animeigo's original LW&C LaserDisc release from way back when. What gives?

No clue, but I do know that the Shogun Assassin DVD releases have been a big seller for Animeigo. I guess the old belief is true that Americans don't like subtitles. Still, having the option would've been nice.

As a final recommendation, I would've had Animego contact Tom Mes at Midnighteye since he was commissioned way back when to write a book on LW&C. Alas, the book never came out. I quite liked it and think that this would've been a good opportunity to get some interesting background into the series as a whole. But truth be told, this is the SHOGUN ASSASSIN collection and not LONE WOLF AND CUB collection. I know. I get it. Still, someone should talk to Mr. Mes about that book... I'm just sayin'...

Oh, and one more thing: there's what looks to be an amazing retrospective of Wakayama Tomisaburo and Katsu Shintaro films at Teatoru Shinjuku (テアトル新宿) starting Nov 11th thru Dec 5th. And yes, you can watch the LW&C flicks in their original celluloid glory. Japanese link here.

Posted by Nicholas Rucka at 3:09 PM