New Liner Notes for Ten Nights of Dreams - Out Now! 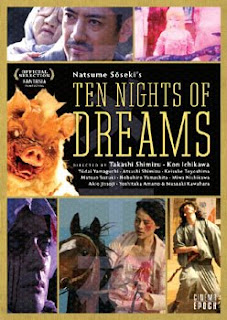 Woah, it's been over two months since my last update. That's something like 14 months in dog years. (Or about four generations of house flies.) Anyway, I've been busy working a lot lately and have also had family obligations and so, in the meantime, the fun stuff like doing a Japanese film blog has to take a back seat to the 'grown-up' (read: paying) responsibilities.

That's the reason why I'm only now writing about Cinema Epoch's DVD release of TEN NIGHT OF DREAMS (Nikkatsu Corp.) which came out last month. I've got a new set of liner notes on the disc talking about Soseki Natsume and the historical context of the short story collection from which this film was adapted.

The film itself is a mixed bag with some really strong entries and others that are, well, uneven. That said, one the great things about an 'omnibus' collection is the fact that there's plenty of other entries to watch and enjoy. Don't like what you're seeing? Skip it.

Wanna know my highlights of this collection? (In no particular order...)
Keep in mind that this is one man's opinion. But you won't know unless you check it out.

Posted by Nicholas Rucka at 1:47 PM