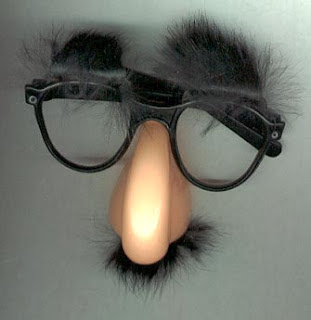 Doing a little housekeeping here on the ol' blog-o and wanted to give an update of what I've been up to a bit lately. 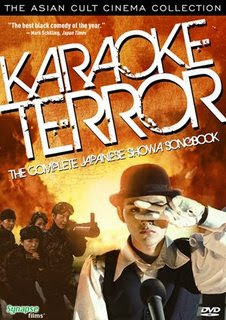 First off, I posted about this previously, but this past Tuesday (04/28/08) Synapse Films released Karaoke Terror here in the US. The DVD includes my first [printed] liner notes. Shit or not, I hope people are at the very least reading them. (DVD Talk, among other sites, has a good review of the film and favorably mentions both Christine Yano's notes as well as my own in their reviewage. Read it here.) So, in short, buy the DVD so you can read what I have to say. (C'mon, support the good folks over at Synapse films; they make, like, zilch doing this.)

Next, remember I did that Japan Film Festival symposium back in the beginning of April? It went well, all told, and I hope to have some sort of essay version of my talk up on the blog in the future. That said, don't keep your eyes too peeled as they might dry out... (The reality is, that I don't have much time to write critical theory at the moment... Unfortunately...)

The theme of my talk, if you recall, was how the type of horror known as 'J-Horror' is no longer a type of Japanese film but instead a Hollywood (read: American) creation.

To be clear, I am convinced that J-Horror is Japanese in the way that Benihana is Japanese: they're both simulacrum for the real thing. Here's what I mean: in the same way that Benihana's teppanyaki dinner, which is more about the performance than the traditionality of the food, has become what many people in America believe Japanese food to be for the sake of my talk I called this J-Horror simulacrum a 'California Roll'** for Japanese films. This foodstuff would not (until recently) be found in Japan because it's not Japanese.

And while I recognize that the genesis of the J-Horror aesthetic is something which is found originally in Japan, what we see being remade in Hollywood right now is not Japanese. It's a Hollywood view of Japanese horror. This holds true even when the film is made by Japanese director (and in fact, the argument could be made that the films are better when they're not made by Japanese filmmakers.) Notwithstanding all of this, in the same way that the California Roll has become a dish that people who eat Japanese food expect to eat when they go out here in the US, the J-Horror aesthetic is now what people think of when they go see a Japanese horror movie. And to my mind, that cannot be a good thing of for no other reason than it enforces a culture of stagnation.

You want to hear something funny? The MC for the symposium was Ichise Takashige's assistant here in LA. That's 'Mr. J-Horror,' to you. (Ain't coincidence a bitch?)

Anyway, here are the links to the Japanese articles (Nihongo de!). These are both in PDF format.

(** "The origin of the California roll is somewhat murky, but usually food historians credit Ichiro Mashita, sushi chef at the Tokyo Kaikan in Los Angeles with inventing the roll in the early 1970s. Mashita realized the oily texture of avocado was a perfect substitute for toro. He also eventually made the roll "inside-out", i.e. uramaki, because Americans did not like seeing and chewing the nori on the outside of the roll." Link.)
Posted by Nicholas Rucka at 12:34 PM

...got my "karaoke terror", have briefly look at the notes.
will read them when ive caught the film. both this and the
"party 7" disc are yet more nice work from synapse.

Cool, you made it into the trades.

I like your california roll analogy. You could take it even further and say that Americanized Japanese food isn't the fad it once was. It takes so long for a project to get "developed" in HW that something like the recent One Missed Call do-over is completely anachronistic (and the law of diminishing returns painfully evident).

They should've gotten you to direct it to at least turn it on its head.

Hey guys - Thanks for the comments!

Logboy, let me know what you think of my written ramblings. But hey! Even if you don't like what I have to say, I think "Karaoke Terror" is a blast to watch. And yes, I agree, the Syanpse dudes did a good job on the discs.

Jason- can you arrange that meeting with the execs for the directing gig? They keep hanging up on me when I call.

But actually, you're right about the anachronism, that is. I talked about that a bit at the symposium, but it seems to all be part and parcel of the whole HW thing: don't take too much risk because you don't want to lose your job. So the shortcut is to go with the sure thing and hell, since it's horror and can be produced for less money, the costs can be recouped in all territories and ancillary sales.

Unfortunately we, the audience, are all the poorer for it. Ah well...

not read the liner notes over yet, but i did watch the film... which... is... strangely flat in how it's executed. it's also oddly successful in how unusual the atmosphere is as a result of how this flatness contrasts against the very matter-of-fact strange behaviour of the characters.

although it apparently contains all the elements and plot points of the original, when you see how much screen time the younger characters have, and sense the amount of deception in the trailer, i feel it was perhaps written more for the mid-30s set (who don't real weekly playboy!) or with that as a focus in a different manner to how the film takes on that balance.

thing is, try to describe the film to someone else, and i think it'll inevitably sound much more exciting than the actual experience of it could well be... the basic, obvious elements to it - very spread-out though they are - are quite wild, and the idea itself, although very subdued, are subtle. it's also trying to be a pay-off movie, but doesn't quite work.

Hello nice to meet you.
KO-N-NI-CHI-WA (^_^)v
I am Japanese.
I saw your wonderful site.
Please link to this site !
【Website】http://food-of-japan.blogspot.com/