Blu-ray Disc will not be SONY's Betamax Again! 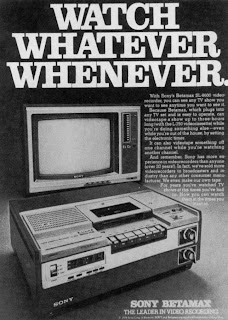 
Sony Corp. has started offering more technical support to the adult film industry in Japan, movie makers said at the Adult Treasure Expo 2007 in Chiba, Japan, and the problem of finding companies to mass produce their movies appears to be over.


It's an important step for Blu-ray Disc. HD DVD has already won over the U.S. adult film industry through its lower costs and ease-of-use. People in the industry say they've received plenty of help from backers of the format, including Microsoft Corp. and Toshiba Corp. But Blu-ray is different. Sony and one of the biggest movie makers in the world, the Walt Disney Co., object to pornography, and Disney maintains a policy against having its own movies replicated by any company working with adult movie titles.


Until now, only a handful of companies operated the stampers needed to copy thousands of Blu-ray Disc movies at a time. But the Japanese company handling most of the early Blu-ray Disc adult film releases in Japan says it has partnered with a Taiwanese company able to secure the necessary equipment from Sony.


"In Japan, there are some problems. Companies cannot press Blu-ray discs because they cannot touch adult-related contracts," said Kiyotaka Konno, director of administration at Assist Corp., a Japanese company that authors and replicates DVDs for the adult industry in Japan. "So we asked some makers in Taiwan to do the work, and then we import the discs back to Japan. The Taiwanese company was able to obtain a pressing machine from Sony and will start mass production in August."


Sony says its policy of not allowing its disc replicating subsidiary, Sony DADC, to copy adult films has not changed. But the company is offering technical support to any film makers looking for help, no matter what industry, a spokeswoman said Monday.


Japan's adult film industry already has ten movies out on Blu-ray Disc (BD DVD), including "JK," "Sex Vacation in Guam" and "Eroist." More are on the way, said Yoshimasa Nozu, a producer at Total Media Agency Inc. His company plans to release at least one more movie per month on Blu-ray for the rest of this year.


By contrast, only one HD DVD adult film has been made in Japan so far, "Perfect Slave Rin," by Glay'z productions.


"HD DVD is popular overseas, but it faces a tough market in Japan," said Takeshi Kobayashi, head of operations at Taisei Co. Ltd., which distributes films under the trade name Glay'z in Japan. "Sony is really pushing the industry to adopt BD DVD."


Price is one issue. HD DVD movies sell for ¥6,090 (US$51.37) each in Japan, while BD DVD movies cost less, ¥4,935. The main difference is that every HD DVD comes with a DVD as well, so users who want to buy the new format but don't yet have an HD DVD player can watch the DVD until they buy a new player.


Sony's PlayStation 3 also presents a challenge for HD DVD. The game console comes with a built in BD DVD player, giving adult film producers an incentive to put their movies on Blu-ray. Japan has long been a stronghold for Sony in the game console arena, and despite stiff competition from Nintendo Co. Ltd.'s Wii, it has sold 4.3 million players worldwide. That puts at least the same number of Blu-ray Disc players in people's homes.


Microsoft, which is part of the HD DVD consortium, has tried to counter Blu-ray in game consoles by offering an add-on HD DVD player for the Xbox 360. But since the players aren't built in, users can opt to forego them, unlike PlayStation 3 users.


HD DVD does have an advantage in the cost of its stand-alone players. Toshiba Corp.'s HD-A2 costs just US$234.99 and comes with five free mainstream HD DVD movies, according to Amazon.com. A similar machine by Sony, the BDP-S300, costs US$499, the same as a PlayStation 3 with a 60G-byte hard drive. The two devices also include five free movies.


Still, despite the head start, HD DVD isn't exactly taking the porn industry by storm. Several U.S. companies interviewed earlier this year have not made good on their plans to release titles in HD DVD, while Blu-ray Disc appears to be gaining ground with its new initiative to work with Japanese adult film makers. The result could be a shift in Blu-ray's favor. U.S. adult film makers said they would use whatever makes sense, and only favored HD DVD early on because the format is less expensive to make movies with and they received extensive help from HD DVD backers.


Good Lord! Has anyone seen "Camp Cuddly Pines: Powertool Massacre"? My innocent mind can't begin to imagine what a film with that title could be about...
Posted by Nicholas Rucka at 8:53 PM

You're right, if course. That said, corporate PR is one thing, but the fact that this time they're willingly turning a blind eye to the technology shows that they're 'once bitten, twice shy'.