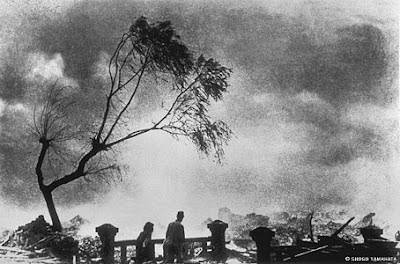 Back in 2000 I was visiting Hiroshima and was able to attend the 55th anniversary memorial service of the first atomic bomb attack. It was a profoundly sad occasion that was passed with great decorum and civility without any angry or maudlin moments, for which there was great risk. While the majority of the attendees were Japanese of all ages, there were also a large number of non-Japanese there. Somehow there was a unity formed with all attending parties, and the desire for an end to violent conflict and wanton death was palpable in the air. At the risk of sounding trite, at that moment one could believe that Peace did, in fact, 'have a chance'.

There's not much else to write beyond that, but legendary Japanese cultural scholar Donald Richie has a book review in The Japan Times of Kikuko Otake's MASAKO'S STORY: Surviving the Atomic Bombing of Hiroshima that is worth reading-- less for the comments about the book itself, than for his own reminiscence on the bombings of Hiroshima (specifically) and Nagasaki. For those who don't know, Donald Richie first came to Japan (where he has lived for almost 60 years) as part of the post-war US occupational forces.

Here's an excerpt from the review:

The cenotaph for the Hiroshima victims reads "Let all the souls here rest in peace, for we shall not repeat the evil," but war goes on incessantly in what promises to be the most bloody of decades and the evil here referenced, the atomic bomb, is commonly flaunted as a threat. How then can the souls of the Hiroshima dead rest in peace?

One way is to keep them always in mind and never to forget what happened on Aug. 6, 1945. But that was over 60 years ago, the lifetime of a generation, and forgetting is a way of recovering. Also, while we can keep alive the death of a loved one or two, it is more difficult to feel the same way about larger numbers of people. With the best will in the world, we cannot encompass the emotional demands of thousands — and the atomic bomb destroyed hundreds of thousands of people.

In addition the dead have been drafted for political purposes. It is now commonplace to hear use of the bomb absolved by reference to all of those lives saved that would otherwise have been sacrificed. But those thus hypothetically saved are only nominally alive and those that the bomb killed are actually and irrefutably dead. The future can never vindicate the past. Only the present can do that. So how is memory of what happened in Hiroshima to be kept alive, to be retained in its pain and horror? Each year the task becomes more difficult.

I remember when horror was fresh. That was when I first read about what had happened in Hiroshima. I read it in that special issue of The New Yorker magazine that contained all of John Hersey's report on the effects of the bomb on the city and its people. I read about it here in Tokyo as I was a member of the Occupation forces at the time.

None of us knew much about Hiroshima, since travel there was not yet permitted and the photographs and later accounts were still censored. Such was the Occupation attitude that even this issue of The New Yorker was banned. All of us were thus learning for the first time what had actually occurred.

There was no forgetting this. It was too horrible, too recent, too close. The atomic bomb, far from being a political plaything, was indeed evil, and all of us felt this — and the onus of having used it, no matter how many lives it hypothetically saved.