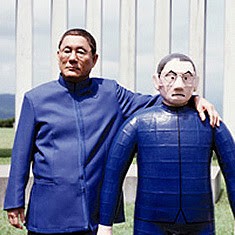 I realize that some of you will have already read this if you are on the KineJapan mailing list or read Variety, but for those who haven't apparently the Venice Film Festival has decided to created a new award called Glory to the Filmmaker! in honor Kitano "Beat" Takeshi's film of the same name.

I have no idea what the criteria is to win one, and I'll choose not to comment on it. However, I do have a question about Kitano and his recent 'filmmaking'.

Why is it that his early films are both so much more interesting and accomplished artistically and directorially than his recent films (post KIKUJIRO)? Is it just 'player haters' that whisper about a crew of veteran filmmakers that surrounded Kitano on these productions and were the real authors of his early films?

At any rate, one thing I can't dispute, I love these early films and totally dig Kitano's performances.

TOKYO -- The Venice Film Festival will establish a prize in honor of Japanese helmer Takashi Kitano, his office announced Thursday.

Called Glory to the Filmmaker!, after Kitano's latest pic, the prize will be given for career achievement and innovation, with Kitano the first recipient. Pic, titled "Kantoku banzai!" in Japanese, will also unspool out of competition at the fest.

Five of Kitano's pics have been selected for Venice over the years, including his 1997 Golden Lion winner "Hana-bi."

Kitano proclaimed himself "extremely happy" with the award. "It's nice that one of my films will live on as a prize," he told reporters in Tokyo.