LEGENDS OF THE POISONOUS SEDUCTRESS: More from Synapse Films and Outcast Cinema

As a follow-up to my post from the other day, today I received a press release from SYNAPSE FILMS announcing all of the LEGENDS OF THE POISONOUS SEDUCTRESS (aka. Yoen Doku-fu Den) films that they're putting out on DVD.

Because I'm a shill for the 'man', I'm just copying and pasting some info from their release. (In reality, it's late and I'm tired.)

EPISODE 1: FEMALE DEMON OHYAKU A quiet actress named Ohyaku is wrongly sent to prison, then pushed by her tormentors to the point of no return. With a demon tattoo splayed across her back and a sword in her hand, she embarks on a crusade of vengeance against all those who have wronged her, laying waste to man and woman alike in her quest for bloody retribution. A gruesome Pinky Violence classic, the film’s merciless parade of action, beheadings, tattooing and torture proved highly influential on later series of sexy action films from Toei Studios in the 1970s.

EPISODE 2: QUICK-DRAW OKATSU The daughter of a swordplay instructor takes on a power-hungry magistrate in the second entry of the series, joined this time by Rui, a wild young swordswoman (Reiko Oshida). The two sexy avengers embark on a blood-soaked quest for revenge after Okatsu is raped and her father slaughtered by one of his assistants. From fencing schools to small-town brothels to the imperial city of Edo, Okatsu and Rui slash their way through dozens of evil men in order to settle the score with those who wronged them, in this swordplay classic which features some of the best fight scenes of the series.

EPISODE 3: OKATSU THE FUGITIVE In the final episode of the series, the legendary beautiful swordswoman Okatsu is on the hunt for Judayu, a corrupt merchant responsible for the death of her parents. Betrayed by her fiancé, she finds herself aided in her quest by a handsome stranger (longtime yakuza movie star Tatsuo Umemiya) – who happens to be as handy with a sword as she is! What is the reason for his kindness, and will Okatsu be able to prevail against her nemesis, now a powerful businessman with scores of allies in high places? Whatever the end may be, the restless spirits of her murdered parents drive Okatsu along her crimson-colored road of vengeance.

Other Japanese film nerd info about the films:

And lastly, but most importantly, the awesome covers: (Yay! Pictures!!) 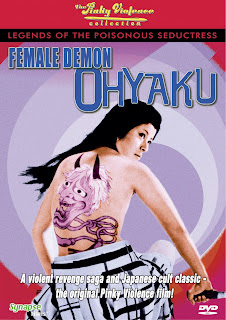 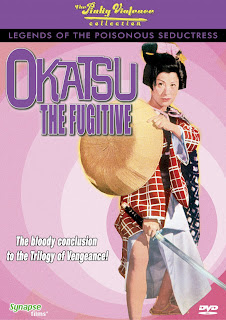 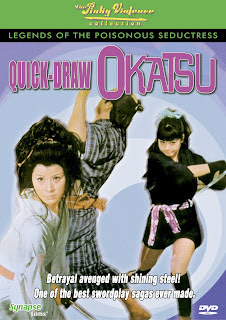