REVIEW: BUSHI NO ICHIBUN (aka. Love and Honor) on Midnight Eye and a bit on Producer Yamamoto Ichiro 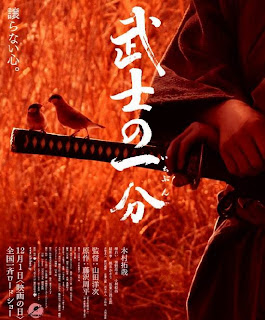 My review of Yamada Yoji's multi-award winning BUSHI NO ICHIBUN (aka. Love and Honor), which I watched in Okinawa back in January, is now up on Midnight Eye. Link.

In a weird bit of coincidence, I spent all day this past Saturday with the producer and co-writer of the film Yamamoto Ichiro, who is temporarily residing in Los Angeles. An incredibly nice chap and totally unassuming, it was very fascinating talking to him about his work as a Shochiku producer and in particular his work with Yamada Yoji (the director, of course, of BUSHI NO ICHIBUN).

One of the interesting things he mentioned was that Yamada Yoji is the last remaining director in Japan who still has a studio contract (with Shochiku)-- an interesting piece of anachronism, I thought. In addition, he mentioned that he could come to Yamada with a film idea, but of course, given Yamada's status, he really chooses which projects he will do (and the studios follow his wishes).

Yamamoto Ichiro also mentioned that one of his jobs was to show Yamada Yoji films as a way of stimulating his creative juices. A cool piece of trivia: The film that inspired the excellent TASOGARE SEIBEI (aka. Twilight Samurai)? John Ford's THE MAN WHO SHOT LIBERTY VALENCE.

Apparently, Yamamoto Ichiro is in the US on a government funded arts scholarship to load up on classic American films that he can then use as references for Japanese directors when he goes back to Japan. As my friend Marc Walkow and I commented to one another, "I can't even imagine the US government doing something like that."

Let's hope that Yamamoto will go back to Japan chock-full of good films that will inspire more directors.

And here's to good movies in general.
Posted by Nicholas Rucka at 12:57 PM

Nice one! Give them a copy of Wayne's Brannigan -- kidding.

At the Bushi gala at Roppongi Hills, Yamada was really treated like a star. Some people criticize his work, but I think it's cool that he's really the only old school studio contract director left -- I'm okay with any film he does.

Thanks for the link to 'Kaabee'. I agree, I'd be interested in seeing what it's all about. Set in the early stages of WWII about normal everyday folks? Recipe for success or disaster? (Saccharine reminiscence of the good ol' days or quality insight?)

I do like some of Yamada's work quite a bit, but I hate seeing it squandered on mediocre projects. I hope he can put out something as good as Twilight Samurai again at some point soon.