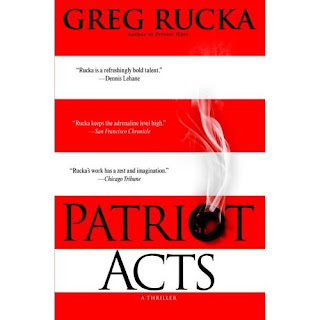 My brother Greg is both a prose novelist and a well-known comic book writer. His new book PATRIOT ACTS comes out today and is the long awaited continuation of his well-received Atticus Kodiak mystery series, which are always an incredibly thrilling read.

Quite simply, even if he weren't my brother, I would absolutely recommend his books. Check them out, if you have a chance.

Starred Review. At the start of Rucka's electrifying sixth thriller featuring bodyguard Atticus Kodiak (after 2001's Critical Space), Atticus is ready to settle down after years of chasing the deadly female assassin known as Drama and finally breaking her away from The Ten—a group of cold-blooded killers operating around the globe. But when he and Drama, now known as Alena, are ambushed and left for dead, Atticus knows his troubles are far from over. Suddenly, the two find themselves the target of a massive manhunt after being mistakenly identified as Ten members. From a tiny village on the Black Sea to the inner sanctum of the Pentagon, Atticus and Alena race to clear their names and punish those responsible for the shocking death of a close friend. Rucka expertly blends intense shoot-'em-up scenes with biting political commentary as Atticus and Alena uncover just how high the conspiracy reaches within the U.S. government. Kodiak fans who've waited a long time for this installment will find it exceeds all expectations. (Sept.)