It's good to know that America still has some cultural export muscle-- at least in so far as fast food is concerned.

Fastfood-- or, as it's sometimes known as Tachigui (literally meaning, 'stand and eat' and refers specifically to the world of food stalls)-- has a long and resplendent history in Japan. One of the best things about being hungry in a major city in Japan is that you can have that problem 'licked' in no time: 1 Coin (500円) Beef Bowls? Check. Udon? Over there. Ebi Ten-Don? On the corner. Oh wait, you want burgers? Something like McDonald's? Yeah, there's a bunch of that too, but apparently you're going to pay more for it now in Kansai and Kanto. Here's the skinny:

McDonald's said it was considering raising prices by an average of 3 to 5 percent at some 1,000 restaurants in areas such as Tokyo and Osaka, where personnel expenses and rent are rising. It also plans to lower prices by between about 2 and 3 percent at roughly 100 restaurants in the Tohoku region and other districts.

It is unusual for a major food chain with fixed nationwide prices to introduce a scaled price system based on the location of stores. McDonald's said it would raise prices on a trial basis in Tokyo and Osaka this month, and lower prices in the Tohoku district and other regions.

The price changes will reportedly apply to all products except items on its 100-yen menu, such as cheeseburgers. Burger sets that come with drinks, now priced between about 500 and 600 yen will go up by about 50 yen, while the products that go down in price will be lowered by about 20 yen.

Due to a surge in personnel costs and rent prices in major cities, some restaurants have continued to suffer financially even though their sales have risen.

The move by McDonalds is likely to prompt other restaurants in a similar position to follow suit. (Mainichi) Link 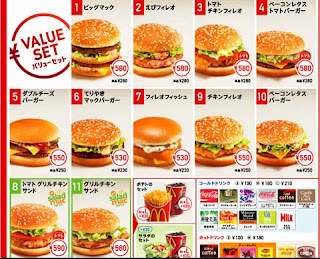 When I was a master's student of International Policy, I did some research on McDonald's international. One of the things that defines their international business model is that they always have their 'core' foodstuffs (cheeseburgers, fries etc) but then in addition they attempt to appeal to the local taste by included menu options that are unique to the locale. For example: Japan would have Shrimp Burgers or Teryaki Burgers or Thailand would have Peppered Pork Sandwiches or Chicken Satay. They also try to use some local ingredients where applicable, available -- or, more importantly, financially beneficial.

Needless to say McDonald's is HUGE in Japan. But it has good competition from other home-grown burger franchises like FRESHNESS BURGER, MOS BURGER, and (Korean owned) Lotte Corporation's FIRST KITCHEN.

Wait, what was that? You want Kentucky Fried Chicken? Yup, KFC's here too (and Round Table Pizza) and it tastes better than the US (not Round Table, though). Which is actually true for ALL of the fast food joints. This should come as no surprise to anyone with even a passing knowledge of Japanese culture, but yes, the service is substantially better here. (But wait, I just used the word 'service' when talking about fast food; here in the states, mere utterance of that word within 100 feet of a fast food franchise gets you struck by lightening.)

The big thing nowadays with Japanese McDonalds is the breakfast menu. Seriously, it's become a 'thing' to eat. Woah. Talk about another world.

Well, perhaps there is no more of a 'Hotdog person' than Japan's own human hotdog Hoover: Kobayashi Takeru. 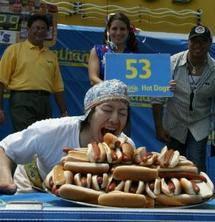 Several years back, I had the (disgusting) honor of attending one of Coney Island's famous Fourth of July Nathan's Hot Dog Eating Contests and witnessing, in person, Kobayashi slurping down a (then) record-breaking 52 1/2 hotdogs in 12 minutes. Good lord, it was intense. Everyone who competed, not just Kobayashi, chokes down their hotdogs like ducks: shoving the food in their mouths and throwing their heads back, waggling their heads from side to side, letting gravity aid their food's descent. The entire event is... vomitously absurd.

(What they don't show you on TV is the warm ups before the competition and the introduction of the eaters. In boxing, for example, there will be a list of the fighter's accomplishments. It's the same in competitive eating. But rather than a round up of previous KO's and TKO's you get, for example, the award winning number of gallons of butter eaten in 12 minutes. Seriously.)

So it looks like the game's on, right? The ultimate competition of super-eaters: "East meets West!" This Fourth of July, looks to be the showdowns of showdowns at Nathan's Hotdog Eating Competition-- only, it seems it might not happen...

I read this today:

'Jaws' ready to bite into top dog's hot dog crown
Japan's wiener-chomping maestro has found his career at a crossroads just at the moment when it was time for him to prove that he's the top dog with a hot dog, according to Shukan Gendai (6/26).

Takeru Kobayashi was the long-time holder of the world record for hot dog consumption, with 53 and 3/4 tucked away in just 12 minutes. But 23-year-old American Joey "Jaws" Chestnut recently scoffed down 59 and 1/2 hot dogs in the same time frame, snatching Kobayashi's world record and setting himself up to take on Kobayashi in the battle for the Nathan's Hot Dog Eating Contest in New York on July 4.

Kobayashi has claimed the past six Nathan's crowns and the only time he has ever been beaten in an eating contest in the U.S. was by a 500-kilogram Kodiak bear, so he should be confident of his chances when he takes on "Jaws." Shukan Gendai points out that Kobayashi first emerged into the spotlight in 2000, when he won TV Tokyo's "TV Champion Zenkoku Oogui Senshuken (National Gluttony Championships)."

Apart from his hot dog exploits, he has since racked up a series of eating records, including stuffing down 97 hamburgers in 8 minutes, scoffing 100 pork dumplings in 12 minutes and chomping away on 41 lobster rolls in 10 minutes. The weekly says he doesn't really "eat" food during competition, but rather "pours them down his throat." When it comes to hot dogs, he first soaks the buns in a liquid, usually water, to soften them, then shoves the frankfurter down his throat without chewing it.

Kobayashi regards competitive eating as a sport and has worked hard to build up his entire body, placing special emphasis on abdominal and heart muscles. He also consumes copious quantities of supplements to keep his internal organs in check, the roughly 50 types he takes costing him around 150,000 yen a month.

Kobayashi normally eats regular meals, spending only around 20,000 yen to 30,000 yen a month on food, virtually meaning he builds his body up on supplements. He's due to go for his seventh Nathan's crown next month, but his manager Kumi Ozeki suggests that Kobayashi's title defense might be in danger.

"Kobayashi's mother died in March and he's currently taking a sabbatical. He's not even in training," the hot dog eating champion's manager tells Shukan Gendai. "I haven't heard a word from him about whether he's going to take part in the July contest and there's no way that I know to get in touch with him." Link

So what will happen? Will Kobayashi show up at Coney Island to defend his Nathan's Hotdog title from "Jaws"? Or will he have to forfeit? But if he shows will he even be in the right state of mind to compete?

These are all important questions and ones I'm afraid we'll have to wait a little longer to have answered. I will, of course, report more as I know it, gentle reader.

Posted by Nicholas Rucka at 9:44 AM