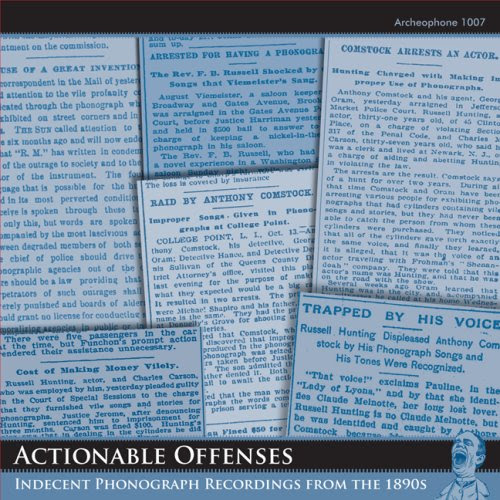 Though not Japan related, I felt this piggy-backed nicely on my posting yesterday about the obscenity conviction regarding MISSHITSU.

Here's a description from Amazon.com:

New York City, 1896. A man walks into a bar. He sits down, orders a beer, and laughs long and hard at the bartender's newest story. It's a good tale, though too bawdy to repeat at home. The next day he goes into the same bar, gets his beer, and drops his change into a phonograph. He's listening through rubber tubes to a man telling a story similar to the bartender's. Without warning Anthony Comstock's defenders of decency charge into the bar, push him aside, destroy the record, and escort the bar's proprietor to jail for promoting indecency. The records on this CD are the few that Comstock's men missed. Scarcity and suppression have kept them silent for a century. Put aside the modern myth of a more genteel era: these late-Victorian performances are indecent even by--especially by--today's standards. And while not for mixed company, they spoke to many in the coarse language and crude humor of daily experience. They were stories told readily in the bar; yet they became legally actionable offenses when fixed in wax and played on a phonograph in that same bar. These newly-discovered recordings play like soundtracks to the moving images of prize fighters, scarf dancers, and kissing lovers flickering on the kinetoscope--the other nickel entertainment in the bar. The records and films were produced in the same years, in the same studios, by the same people. They were enjoyed in tandem by the same audiences. They were accused of violating the same standards of decency in communities where they were profitably exhibited. And together, they presaged the clashes between morals and mass media that would erupt regularly during the century to follow. This CD presents these extraordinary recordings in their unexpurgated entirety. It allows us to hear uncut and uncensored what new technology made possible and the protectors of public morals made illegal: "indecent" performances driven out of business, off the public stage, and into the privacy of unmixed company in the home.

I think this is interesting for several reasons: First, it proves, without a shadow of a doubt, that the infant recording technology of the phonograph (and the wax cylinder) was also harnessed by the rude and crude for their 'shock jocking'. This is, of course, similar to what happened with early photography and film and more recently with Betamax and the Internet.

Second, in response to this obscene material Anthony Comstock (famous for his run-in with play write George Bernard Shaw) and his crusade for public decency-- a bane for civil liberties group and anyone else who found government sponsored meddling in their private affairs to be offensive-- was essentially successful in eradicating this small genre of prurient recordings.

This is continued proof that the pattern of history repeats itself as they say, but this cycle of debate and crusade against what is viewed as objection and inappropriate for public consumption (within the media) is something that societies will debate for continuously-- in the US or abroad.

As a final note, the interview on NPR, which I highly recommend listening to for its historical perspective. (I couldn't stop thinking about DEADWOOD and the debate over its copious use foul language.) Fascinatingly, they also mention a new 'lost' word they rediscovered, which had been essentially lost to time: "Scrouge" (or 'scrowdge' not sure of the spelling). Literally it means to 'fit into a small place.' But its colloquial use is 'to copulate.' (That's expected, right?)
Posted by Nicholas Rucka at 11:26 AM