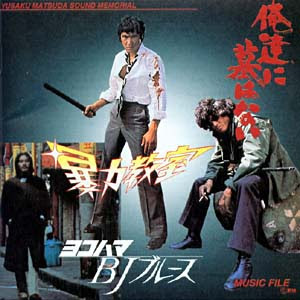 The Classroom of Terror
Bouryoku Kyoushitsu

Last night I had a chance to finally sit down and watch one of the many DVDs I brought back from Japan this time round. Selected purely for it's promising exploitation title and for Matsuda Yusaka's starring role, I had a feeling before I watched it that I was going to get something exciting and funky.

Telling the story of 26-year-old disgraced ex-boxer Mizoguchi (Matsuda), who is hired as a gym teacher by a highschool suffering from the worse case of remedial school thuggery this side of CROMARTIE HIGH (魁！！ クロマティ高校 THE★MOVIE(2004). The heads of the school (and the PTA) are worried that its reputation will be in the dumps in no time and that the already miniscule number of college bound students will drop to zero. The source of the problem? A group of badboy bikers called the "SIDEWINDERS" who look like they stumbled out of a Guitar Wolf concert and into the classroom. But the SIDEWINDERS aren't your typical group of miscreants; these boys are baaaaaaad. How bad? They drive some of their teachers mad with paper airplanes and porno mags in the classroom and the others with their fists. Outside of school, they drive their motorcycles the wrong way in heavy traffic, smoke, drink, watch dirty pictures and piss on their jackets! (I know, I didn't get it either, but that's how tough they are!)

But no matter how rotten these dudes think they are, it's the scumbags who run the school who turn out to be the worst of the worst as Matsuda soon finds out. When the daughter of the school principle discovers that her father is going to defraud the school and the PTA of 400,000,000円 (about $4,000,000 US) she turns into a bad seed: doing drugs with the SIDEWINDERS and then doing the nasty with one of them. The SIDEWINDERS, in turn, photograph this and try to blackmail the principle with said pics. Mizoguchi is then ordered to go in and fix the situation, which he does-- violently. But that suits the head of the SIDEWINDERS Kitajo Hitoshi (Tachi Hiroshi) just fine; he's always down for a good war. With the fight now personal, Hitoshi sets his eyes on Mizoguchi's younger high school student sister, Junko, whom he rapes (and then, in the manner of all things Japanese film chauvanistic, falls in love with her??!!). The gloves are now off for Mizoguchi and he'll fight Hitoshi-- consequences be damned.

Sure enough Mizoguchi loses his job for beating up a minor. As an unemployed loser he tries to drink himself into oblivion Mizoguchi but after a series of violent events culminating in the death of Junko, Mizoguchi has to find out what's going on and how to stop it. What he discovers is the truth about the school and how the SIDEWINDERS -- though ruthless, amoral ruffians -- are rebelling against a system of hypocracy and corruption (an allegory for 1970s Japan anyone?). In the end it's Hitoshi and Mizoguchi who must clean up the school.

BOURYOKU KYOSHITSU is the third outing of (relatively) unknown director Okamoto Akihisa-- all of which were made during 1976. I haven't been able to find out what happened to him after this film that made it so he didn't pick up the director's bull-horn again (and only once) until 1996(!!), but it's clear from his Japanese resume that he was being groomed as a Toei journeyman-contract director as, by 1976, he'd clearly earned his stripes as an assistant director on a host of films. The directing is quick and dirty with the performances being standard character parts for the male cast, under-developed for the females (they serve as the quick boobie shot here and there and the occasional story catalyst)-- and the rest is just gesturing. The camera work is similarly quick but considered-- and, as to be expected, Fukasaku Kinji's shadow is large as seen in the extensive hand-held photography with it's (very) creative framing.

In addition, the film certainly brings to mind Ishii Sogo's 1978 debut film PANIC IN HIGHSCHOOL (Koukou Dai Paniku 高校大パニック(1978)), but whereas Ishii's film ultimately is a sympathetic tale of youth rebellion against anachronism, Okamoto's film is really just a typical yakuza tale that's been transposed to the youth gone wild genre. In the end, the hero will triumph, bruised and scarred, but the evil will be excised like the cancer it is. (Hey hey! There's even a katana used at the end.)

Talking about the score for a moment (this is something that I'm going to explore more in the future on this blog) BOURYOKU KIYOSHITSU has an amazing, throbbing funk soundtrack by genius veteran composer Kikuchi Shunsuke (composer of several of the FEMALE CONVICT SCORPION films among nearly a hundred others).

I've been actively collecting Japanese soundtracks for the last several years and Kikuchi's work keeps showing up on them. One of the things that I like about Japanese soundtracks in general, and 1960s and 70s ones in particular, is their incredible musicianship and ability to evoke the feeling of the film-- even without watching it. What I mean specifically here is not only are the composers first rate, but the studio musicians are also incredible. Kikuchi's score for this film has a great drive and flavor. This isn't the plain-jane stuff pouring out of Hollywood (and Japan) nowadays; I'm mean, you can tell there was a guy who sat down and wrote something that he felt was 'rocking' that also pushed the narrative forward. This is something that the audience can feel when they watch the film and I, for one, really appreciate it-- almost like it's a dying art.

As a final note, if you search out this film in Japan, make sure you don't confuse it with the James Belushi, Louis Gossett Jr. and Rae Dawn Chong production BOURYOKU KIYOSHITSU '88 (暴力教室’８８(1987)) aka.
THE PRINCIPLE(1987).

Because that's, of course, a very different film.

I love how movies are renamed in Japan.


Link to the Toei Matsuda Boxset Site.
Posted by Nicholas Rucka at 10:23 AM